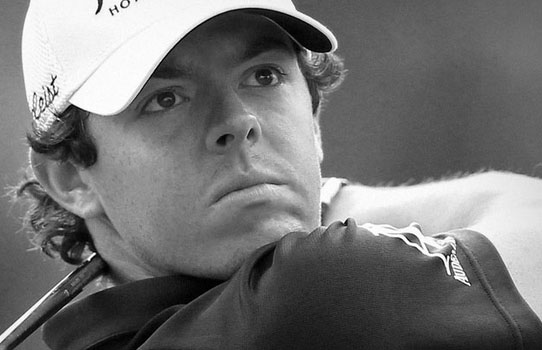 Word from industry insiders is Rory McIlroy will be the newest endorser of Nike Golf. McIlory will end his current relationship with Acushnet Co., whose brands include Titleist and Footjoy, in favor of a Tiger Woods-esque payday of at least $170 million. The partnership between McIlroy and Nike will surely result in McIlroy becoming one of the richest athletes in the world.

The 23 year-old Northern Ireland native finished number one on the PGA Tour money list this past season, a spot ahead of his new Nike cohort Tiger Woods. McIlroy out-earned Woods by about $2 million dollars, raking in roughly $8 million in prize money alone. Though both McIlroy and Nike have denied the contract talk up to this point, insiders at Nike Golf have also hinted at a commercial already shot which included both McIlroy and Woods.

Judging from recent history, there was not the slightest chance that McIlroy would re-sign with Titleist/Footjoy. In reality, McIlroy is too expensive for Acushnet Co. He is a hot commodity (as I?m sure female fans will attest, quite literally) after breaking the 72-hole aggregate score record at the 2011 U.S. Open at Congressional when he shot a 16-under 268, winning by 8 strokes and becoming the youngest U.S. Open winner since Bobby Jones, as an amateur, won the trophy in 1923 at Inwood Country Club. McIlroy won his second major this past August at the PGA Championship at Kiawah Island Golf Resort, winning again by 8 strokes, a Championship record, then helping the European Ryder Cup squad pull a massive come-from-behind win in September. As a sidebar, when the defeated Bobby Cruickshank took home the winner?s check in 1923 due to Jones? amateur status, it was for the amount of $500, equivalent to roughly $6700 today?boy, has the game come a long way.

McIlroy isn?t the first big name to cut ties with Acushnet Co. Woods was in part a Titleist man himself before Nike lured him completely away. Sergio Garcia and Phil Mickelson, at their best and most popular, were also let go by Acushnet.

Some in the professional golf community have questioned whether the move to Nike?s equipment might hurt McIlroy?s game, including Nick Faldo. In short, Faldo called the switch dangerous but close friend and fellow Northern Irishmen Graeme McDowell brushed off Faldo?s theory citing McIlroy?s tremendous talent-level. Nike is rolling out some new technology for their young buck. The world?s first high speed cavity back driver, the VRSCovert Driver, is in the process of conforming to USGA/R&A rules and the new line of VR Pro Blade Irons will surely make McIlroy?s transition as smooth as possible. Read more about Nike?s new VRSCovert Driver.

McIlroy will be joined by Nick Watney and Kyle Stanley on the new Nike Golf team. McIlroy, dubbed The Intimidator” by Woods himself but known to others as “Boy Wonder has an image and a game that makes him, without a doubt, both the present and future of golf. Nike has thus paid him accordingly.