Use Game Day Giveaways to Boost Attendance at Sporting Events 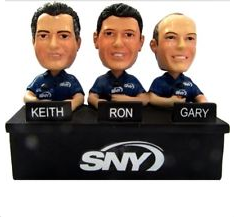 If you go to a professional baseball game, the odds are good that you’re going to be leaving the stadium with a promotional giveaway. Game day giveaways are common among all the major sports. However, baseball teams make use of game day giveaways more than any other league.

The reason is clear. At the Major League level, teams have 81 home dates every year. Selling out that schedule is difficult for even great teams. It’s nearly impossible for teams that are mediocre or worse. To encourage fans to enjoy an evening at the ballpark, nearly every team uses a full schedule of fun and appealing game day giveaways.

As most Major League teams have learned, however, not any giveaway will do. Fans have become accustomed to the traditional giveaways of schedule magnets, mini bats, and baseball cards. To really attract fans, teams generally have to think outside the box and come up with game day giveaways that are perceived as unique, quirky, and fun like the bobblehead, pictured here, that we recently produced for one team.

One of the most popular game day giveways from the 2013 Major League season was handed out by the Seattle Mariners. They celebrated the team’s players’ facial hair with a bearded knit cap. It was a traditional knit cap with an attached brown knit “beard” that could pulled over a person’s chin and mouth. The giveaway was a hit.

A giveaway can also be popular if it’s tied to an event. The Los Angeles Angels Rookie League affiliate Orem Owlz scored a game day giveaway hit in 2013 with orange day-glo sunglasses. That may not seem like a popular giveaway at first glance. However, the giveaway was tied to an effort to set the Guiness Book World Record for “Most People Wearing Sunglasses at Night.” The event drew a sellout of more than 6,000 people.

Finally, anything that appeals to children is almost certain to be a hit. There are several giveaways on the 2014 Major League Baseball schedule that are geared specifically towards kids. We were fortunate enough to be the supplier to a couple of them. On April 27, the New York Mets are giving away team-branded loom bands, which are highly popular right now among the pre-teen and younger set. On April 6, the Los Angeles Dodgers are giving away Yasiel Puig Fatheads. Kids love putting the giant, adhesive Fathead posters on their walls as a way to personalize their space.

There are two keys to pulling off a successful game day giveaway. The first is to come up with a unique idea that will draw the attention of fans, game attendees, and the media. The second is to plan appropriately. The only thing worse than a bad giveaway idea is a great giveaway idea that isn’t executed properly.

Game day giveaways can be a very effective way to boost attendance and support. If you can come up with a creative idea and execute it properly, the giveaway should pay substantial dividends.