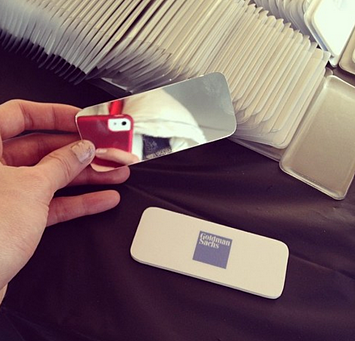 Goldman Sachs raised at least one pair of eyebrows with its promotional giveaways at a Harvard event in early February. The event was Women Engineers Code, also known as WECode. It was organized by an undergraduate group and aimed at female college students who may be interested in computer science. Goldman Sachs brought a variety of giveaways to the event, including t-shirts and key chains that hold headphone cords.

Two of their promotional giveaways, however, generated extra buzz on social media. An attendee of the event posted pictures on Instagram of cosmetic mirrors embossed with the Goldman Sachs logo. The company also reportedly gave away nail files. The Instagram picture was accompanied by a line that suggested that the person who took the picture may have found the giveaways to be sexist.

For their part, Goldman Sachs representatives said they were told to bring giveaways that appealed to women. On that account, I’d say they succeeded. One of the most important rules in choosing a giveaway is to distribute an item that attendees will actually use. The last thing you want to do is give away an item that will immediately be thrown away or buried in a desk drawer.

I think the distinction between sexist and appealing can be rooted out with basic common sense. Is it an item that a recipient will genuinely use? Is it an item that many people commonly own and use? Is there anything offensive about it other than possibly the fact that it’s primarily used by only one gender?

If the item in question is a commonly used, helpful item, then I don’t think it’s sexist. Rather, it could represent an opportunity to directly appeal to one segment of the attendees at the trade show.

Far too often, companies try to please everyone with generic and bland giveaways. In the process, they end up appealing to no one. It could be more productive to target a specific group of attendees, such as women, with giveaways that directly appeal to them. Cosmetic mirrors and nail files are good items. Others could include sports bottles, makeup bags, tote bags, flower pots, lip gloss, and more.

While at least one person at the even questioned the appropriateness of the Goldman Sachs giveaway, not everyone felt that way. The organizers of the event welcomed the cosmetic mirrors, saying that they gladly accept any free swag that sponsors want to provide. Common sense may prevail after all.