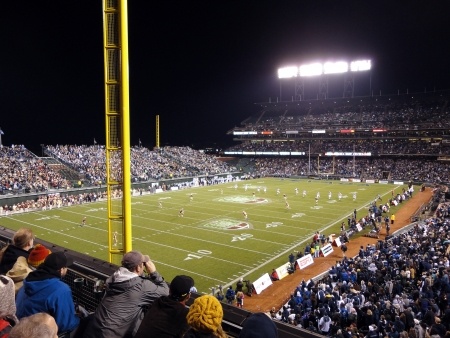 College football players whose teams advance to bowl games are often rewarded with national television exposure, playing time in front of NFL scouts, and perhaps one last shot at gridiron glory with their teammates. They also get one little-known, but extremely popular benefit – SWAG, or “stuff we all get.”

Gift bags at bowl games are now often accompanied by gift suites, according to a recent article in Street & Smith’s Sports Business Journal. A recent study by the journal showed that 18 of this year’s 36 bowl games offered gift suites to participating players, coaches, cheerleaders, and other select VIP’s. These suites are usually in addition to the traditional gift bags of sports promotional items that participants receive.

A gift suite is a private, invitation-only event in which participants are allowed to view, test, and order a number of high-priced or in-demand products. The NCAA limits gift suite awards from bowls to $525 per participant. However, participants can also receive up to $400 each from their conference and from their school.

One of the most unique items in this year’s gift suites is Viva, a recliner from a company called Southern Motion. The recliner is popular because it comes armed with USB ports for charging electronic devices. Southern Motion is also offering a chair called The McLaren, which comes with a sturdy frame that can safely hold a 300-pound offensive lineman. The chairs would normally retail for well above the $550 limit, but bowl games are often able to negotiate lower prices by ordering in bulk.

Why Showcase Your Products in a Gift Suite or SWAG Bag?

A Southern Motion executive said that the idea of being in the guest suite was appealing because it gave the company access to a market it otherwise wouldn’t reach. Southern Motion currently only sells its chairs through retail stores.

Companies often choose to include their sports promotional items in gift suites or swag bags as a means to market their product. However, they may also do so to test market items that haven’t yet been released. Companies like Oakley and Sony have previously offered items that weren’t yet available to the general public. If the product is something geared towards young adults, it’s popularity in the gift suites could give the company an idea of how the product may be received once it’s available for sale.

Other popular items available in this year’s gift suites and sport promotional items bags include Fossil watches, Ogio bags, New Era products and Oakley sunglasses. Oakley products were only available at seven games this year, but the company has indicated that they plan to be at more games next year to promote a new assortment of products.