NHL Not Only Locking Out Players 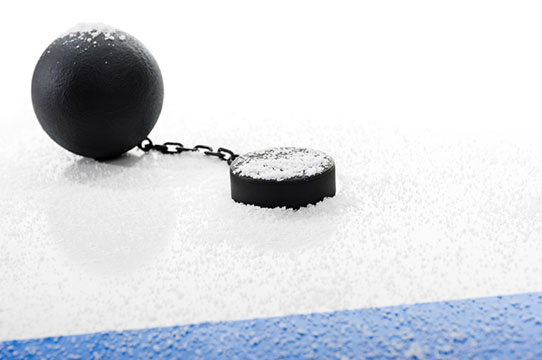 In my biased opinion, hockey is the greatest sport to ever exist. It?s the most fast-paced and brutal form of entertainment I have come across in my 21 years and I am hopelessly addicted. Those who have played before know how difficult it is to handle the puck, move your feet, and keep your head up all at the same time, and can appreciate the grace with which NHL players do so. However, those who haven?t stepped foot on the ice might not be able to comprehend the raw athletic talent of professional players.

It?s a damn shame that the sport of hockey historically only seems to be popular in certain regions of the country such as New England or further west towards Minnesota. Stanley Cup victories by teams like the long-overdue Boston Bruins in 2011 have certainly heightened enthusiasm, but just as its popularity appears to be spreading we have entered a bitter LOCKOUT ? a phrase feared by any fan regardless of the sport.

Why? The National Hockey League has seen overwhelming success in recent years ? Ticket sales have been record-high, team merchandise was flying off the shelves, and television ratings were up. What it comes down to is a greedy game of tug-of-war at the expense of fans and small businesses.

The fact is ? owners and players are going to walk away with hefty bank accounts regardless of the outcome. It?s important to put into perspective everyone else that is taking a hit and ask ? Is it really worth it? Much opportunity is lost for those businesses that cater to sports fans. Local bars and restaurants are empty on would-be game nights, promotional products that may have been featured at a certain game have no chance to be made, and merchandise in the stadium pro-shops remains unsold.

If you?re looking at the glass half full, at least this has occurred at a time when professional sports are overlapping ? the NBA is taking off, the NFL is in full-swing, and the MLB just wrapped up another exciting World Series. If businesses are smart they might want to start framing their promotions around these other sectors of the sports industry.

My message to the opposing parties ? We fans can only live vicariously through Xbox for so long.

To my fellow fans ? Keep the faith.