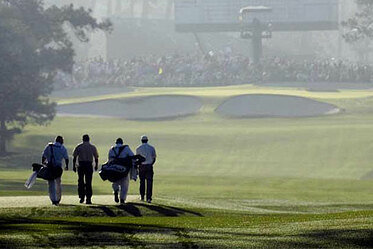 The name of the tournament alone tells you all you need to know about the quality of the event. The Masters Tournament, held in the first full week of April every year, is the premier golfing event on the PGA Tour. And the drama of each passing tournament only heightens the intrigue viewers and patrons (not fans, crowds, nor spectators; yes they can tell Bob Costas what words he?s allowed to use) expect with each coming year. The Masters has so much power and appeal they are able to tell the broadcasting corporations how much time they had for ads, cutting the number of minutes per hour from 12 to 4…because they could.

The Masters website has become a virtual museum of the event?s great history, from the humble beginnings in the 1930?s before the tournament was known as the Masters, to the sacrifice of players and the course itself for the war effort in the 40?s, to Louis Oosthuizen?s Double-Eagle last year, and everything in between.

Competing in such a vaunted event isn?t all poetry and history however. It takes grit, skill, and perhaps a bit of luck to qualify for the the most selective list of invitees for any PGA Tour event.

While the course of the tournament can shift on each hole, and Goliaths and crow- er- patron favorites can be toppled by the proverbial David, i.e. Zach Johnson defeating Tiger Woods, the thrill of the unknown is always exciting us as an audience. Watching seemingly invincible players succumb to nerves or pressure, and seeing underdogs rise up to contend with champions for a weekend is magical every time.

It is always a treat to be able to see the best players in the world compete at the best event in the world, and no matter who you want to win, no one will be disappointed by what they see, at the first hole, the twelfth hole, or the eighteenth. The Masters will continue to be a masterpiece.