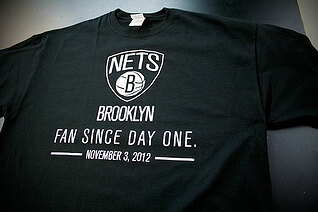 The Brooklyn Nets, in their new home at the state-of-the-art Barclays Center at the intersection of Flatbush and Atlantic Avenue in the borough of the team?s namesake, won on Opening Night against the Toronto Raptors 107 to 100. The tidal wave of emotion inherent in NBA Opening Nights was heightened by the novelty of a transplanted team showing off their newly designed threads. Strong efforts from Deron Williams, Brook Lopez, and C.J. Watson, as well as enthusiastic support from Jay-Z and Beyonce sitting courtside, propelled the sellout crowd of 18,000 to rise to the occasion.

Also inciting the attending fans to come together in unison were the limited edition Brooklyn Nets Opening Night give-away t-shirts printed by parsonsKellogg. The simple yet stylish black shirt with the team?s logo and the text FAN SINCE DAY ONE” and “NOVEMBER 3 2012” centered underneath is sure to become a collector?s item.

Brooklyn native and minority owner Jay-Z had a hand in designing the Nets? new colors and logo. The “less is more” mantra seems to be the direction Jay-Z and his creative team took with the project. Brooklyn has a deep history of hip-hop culture ?Beastie Boys Notorious B.I.G.? and is now recognized as a growing hub for artists of all variety. The new Nets logo and color scheme reflects the burgeoning creative capacity of Brooklyn?original clean lucid.

Along with Nets home games the Barclays Center will become the new home of the New York Islanders beginning in the 2015-16 NHL season. Jay-Z has already performed a number of shows in the arena and aside from sports fixtures the Barclays Center will also host notable entertainers and acts such as Justin Bieber (Nov. 12) The Who (Nov. 14) and Dave Matthews Band (Dec. 21).

It is clear there is a lot of excitement surrounding not only the new-look Nets but also Brooklyn?s new venue. The resonating chant of “Brooook-lyn! Brooook-lyn!” at the end of the Nets? home opener exemplifies a fan enthusiasm in Brooklyn that is in stark contrast to the painstakingly quiet empty atmosphere at the franchise?s previous arena in Newark New Jersey where the team was practically giving away tickets for as low as $1.

See more pics on our Facebook page. The t-shirts were also spotted in the wild on NY Post andGrantland.