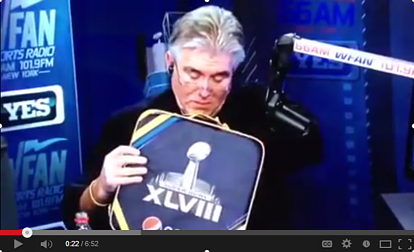 The NFL rolled the dice this year by holding the Super Bowl in an outdoor, cold-weather climate for the first time in the league’s history. The game had previously been played in cold-weather cities like Indianapolis and Detroit, but those cities both have indoor stadiums.

New Jersey’s Metlife Stadium, the location of this year’s game between the Denver Broncos and Seattle Seahawks, is a purely outdoor stadium. That left the league vulnerable to extreme winter weather. Although football can be played in nearly any condition, the league didn’t want fans to pay thousands of dollars to watch the game in a blizzard.

While the league couldn’t control the weather, it could control its efforts to keep fans at the game comfortable. The NFL is a leader in providing giveaways for sporting events. To that end, the NFL gave away swag bags to all attending fans to help them enjoy the game in comfort (click the video thumbnail to watch as Mike Francesca from WFAN reveals the contents of the swag bag). The swag bag included:

The game ended up being played at a comfortable temperature of 53 degrees. However, New York and New Jersey were both hit with a massive winter storm just three days after the game, so the NFL dodged a bullet.

While the cold weather swag may not have been needed, it was certainly appreciated by those in attendance. The NFL’s gift bag could also serve as inspiration for other organizations looking for giveaways for sporting events taking place in colder climates. After all, the products available in the swag bag weren’t specific to football and could be packaged together for nearly any event.

The National Hockey League has started playing a few games every year at outdoor stadiums, so a similar cold-weather swag bag would be appropriate for those events. The Winter Olympics brings to mind numerous sports that could benefit from promotional giveaways of cold-weather items and apparel. Ski races and snowboarding events in particular would be ideal sporting events for cold-weather giveaways.

While we’ve primarily discussed giveaways for sporting events, there’s nothing saying such items wouldn’t be appropriate for non-athletic events. Corporate or charity events that take place outdoors in cold weather could also use similar items to keep their participants comfortable.

In using these giveaways for the Super Bowl, the NFL followed one of the most important rules of promotional product giveaways. The gift will be more appreciated if it is something that can be used. Regardless of whether an event takes place in a cold or warm climate, a giveaway that can actually be used is far more likely to be remembered than a throwaway promo product.